Bourdieu, in his Homo Academicus, presents a comprehensive panorama of how the elites are reinforced by the hierarchical system, where “academic capital is obtained and maintained by holding a position enabling domination of other positions and their holders” (1988, p. 84). In this sense, the academic career could sometimes be perceived as an “obstacle race and a competitive examination” (Bourdieu, 1988, p. 87). There are plenty of scary and frankly disappointing stories about how power is held (and performed) in academia. Nobody seems to be free from those stories and I even have one (or two) friend that had left the academic career for some of those reasons; they were tired of banging against the wall of authoritarianism or following the path of deception. They simply gave up because they lacked support, mentorship, trust or resources. 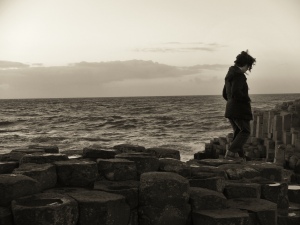 There are, nevertheless, other kind of stories that are always important to be told. Mostly to remind us why we are here, why we keep doing this against all odds and why we are still in love and engaging with the academic world. This is not a very British thing to do but my Mexican self allows me to do things “unquiet and non-soberly”. This is my small and humble homage to one of the most amazing friends and colleagues I’ve ever had as a Homo Academicus.

I came to Leeds for a job interview. When I first entered the room, she was the first person that I noticed, I felt reassured by her honest smile and awestruck by her youth. She seemed more a graduate student than the PI of a million and a half pounds project. Her ungovernable hair and casual clothes took away all the solemnity of the occasion and I interpreted her necklace as a sign of good luck: it looked like a Mayan’ seashell. It was my first formal job interview in a foreign languaje. When she called me, a couple of hours later, to offer me the job, I was in a pub across the street from the Uni, having the first bite of my burger and the third sip of my beer (when in Rome…), I couldn’t understand her northern accent because of the loud music and my own limitations when I speak on the phone so, I only managed to say: “let’s have lunch tomorrow and talk about it”. It took me a while to manage her accent and I guess she still struggles with mine. Luckily we had developed this understanding of each other in a Mexican-Northern English middle ground.

I got the job and the incredible opportunity to work with her, to learn from her, to collaborate with her. These were three years of learning and growing and, from the very first day, she shared her good humour, patience, common sense and wisdom. I always felt trusted and supported. This was, no doubt, an important part of my formation and I will always be in debt to her. In these three years we wrote four papers together and they formed the smoothest and most amazing dialogue I’ve ever had with any other colleague. In those papers, all the good ideas and punching lines are hers and, despite of this, she was always respectful with my contributions, turning the writing process into a constant and fruitful dialogue.

But more importantly, we forged a great friendship. I will take with me dozens of fun memories and she shared her family with me. D’s “brewery” will always be my favourite in Leeds and her two girls were always fun to watch and play with. In these three years we travelled three continents together, I won a breaking eggs contest two years in a row, I lost flights and trains for her amusement, we had paellas, sushi nights, tacos, all sorts of vegetarian meals and thousand flat whites at Opposite. My biggest fail was, of course, that I couldn’t turn her into someone that shows appreciation for tequila. Nobody is perfect I guess.

Loïc J.D. Wacquant, probably the best student and collaborator of Bourdieu, when discussing Homo Academicus, proposes that the text “also constitutes a political intervention in the specific politics of intellectual life”. That is precisely what HT does, a constant intervention in all kinds of academic politics: in culture, feminism, technology and, ultimately, academia itself. And that’s what I admire the must of her, her fully and unquestionable commitment to equality, justice, critical thinking and freedom, her inspiring belief in the role of academia in the construction of a better world. We need more academics like her and less bureaucrats interested in power. I can’t thank enough all that I’ve learned with her.

In these three years, one thing I learned for sure: expertise is a woman and her name is Helen.